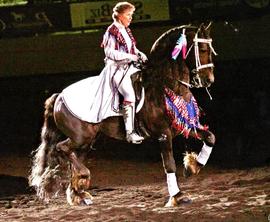 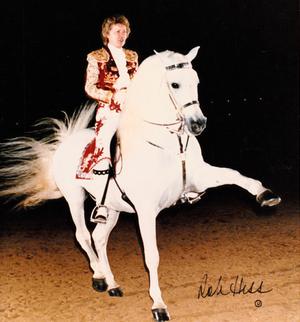 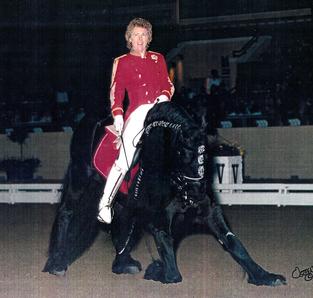 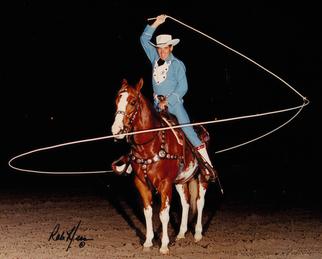 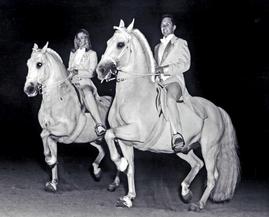 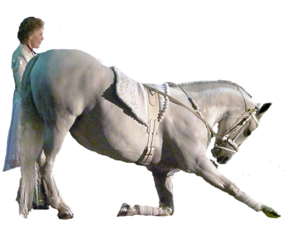 ​welcome to my World !

Forget “Dancing with the Stars” and its retired athletes and tired celebrities. The stars of this dance show are powerfully muscled and agile, with an elegant and graceful way about them. Did I mention that they’re 15 to 17 hands tall and weigh more than 1,000 pounds? That’s right, the Dancing Horse's show is back in town and we caught up with trainer and choreographer Dianne Olds Rossi and asked her a few questions about her lifelong passion for horses.

When did you first show an interest in performing horses?

When I first opened my eyes! (laughter) I’ve had an interest since infancy. There are pictures of my mother putting me on horses as a young child. When I was 15 I went to see a special exhibition at the old Pan Pacific Auditorium in Los Angeles and I still remember the lady under the spotlight in the middle of the arena. The performance was imprinted in my brain as I watched her cantor her horse backwards then go into a graceful bow.

How did you settle into the entertaining end of it?

In my 20s I worked under a famous German High School rider Albert Ostermaier. I held down two separate jobs to be able to work with him. He was extremely talented and successful.  His horses were his kids and that thought has always been with me. A few years later I had my own stable of training horses of many breeds...Lipizzans, Arabians and Andalusians. I was competing mainly in the Arabian Horse Shows when I realized with all these different breeds I had a whole show sitting in my barn. So I decided to try my hand at entertainment. My mentors were from “old circus” and I definitely was not circus so my performances went a different way completely unique to me. I was also able to study under Arthur Konyot and Dorita Konyot famous riders of their time.


What was it like to be married Rex Rossi a Hollywood stuntman?

I learned that when it comes to Hollywood, stay out of if!” It was his world and not mine. He was a champion trick and fancy roper and trick rider as well as a stuntman and was quite a bit older than I was when we were married. His era was Tyrone Power (The Mark of Zorro) and Gene Kelly (Three Musketeers). He taught me to do liberty work with my horses, where they run free and follow your commands. I was very grateful for that knowledge.

What did you work on while in Hollywood?

The Disney Studio hired me to stand in for the headless horseman. They put a three-cornered hat on me and shot video of me moving the horse around. I did some cigarette commercials, back when they still existed and working on the movie ‘The Last Action Hero’ with Arnold Schwarzenegger was fun. We filmed inside a huge movie set designed inside look like a castle. It was really interesting to see how they made their magic happen. It took three days to film what turned out to be about 30 second segment in the film. Hollywood work is hard and time com-summing and was not something that I wanted to make a career on.

You’ve worked with Arabians, Lipizzans and Friesian horses among others. Do you have a favorite breed to train?

Friesians are unusual and extremely impressive. They are difficult and lengthy to train because of their size and way of going but in the end they make excellent show horses. Andalusians are great to work with...are exciting movers and are great performers and completely opposite of a Friesian. I love the American breeds as the Arabians and the American Saddlebred horses, they catch on quick, are extremely smart and you better stay smarter than they are. Once you get these horses used to the spotlights, the loud music and unusual atmosphere they all make great show horses. I don't have a favorite breed really I just pick what I think will make the most impact on the audience.


Is riding & training the "High School" a disappearing art form?

Yes in some ways. There are wonderful things done with horses right now, but what I do personally is not going forward very smoothly. There are some equestrians coming up with unique ways of showing horses however making it an enjoyable and snappy performance is beyond their ability. It is a learning experience of trial and error and having a feeling of audience satisfaction. The audience is usually entertained easily but they are smart and know when a performance is outstanding and completely choreographed to the music. If a rider ignores that and only goes for the recognition then their learning experience stops. Their horse training ability comes into play and if they have not accomplished that important ingredient and connection between their horse then the performance will be just acceptable and not great. If you are doing your job right you can feel it.  It either works or doesn’t.

Do you train horses to do other things besides dancing?

I do a lot of general horsemanship. I educate people on how a horse thinks, how to read what he’s thinking by his eyes and his actions. Horses are inherently dangerous and people can get hurt but people will get an honest answer from me. If a horse isn’t safe for them, I will tell them.

What can we look forward to at the show?

It’s lights, camera, action! And like no other horse event you’ve ever seen. It’s all costumed, choreographed to the exact timing of the music and most of all my imagination. You might see Darth Vader before your eyes on a black stallion and next running full blast past the audience would be Disney's Pecos Bill chased by the Lone Ranger. On the other hand there might be beautiful horses under silks of material flowing from the ceiling and then followed by our special fellow Barney Google.... comic relief when you least expect it. It is my personality using beautiful horses to express my chosen profession.